The site is secure.
The https:// ensures that you are connecting to the official website and that any information you provide is encrypted and transmitted securely.

The results of the 2022 Mobile Wireless Drive Test, which evaluated voice and data service in the state for six different mobile wireless providers, are described in the report. The report includes printable maps depicting the results for each provider. Results of the test are best viewed on the interactive map linked below. The map depicts hexagons that are shaded to show the coverage identified within that area. The map depicts the Drive Test results in 14 separate layers, with separate maps for voice, data, and each provider. Users can manually enable the layers they wish to view, one layer at a time.

For voice service, each map shows hexagons in the following colors:

For data service, each map shows hexagons in the following colors:

The map also has a pop-up function. Clicking on a hexagon will depict a summary of results for all tests conducted in that hexagon.

The results of the drive test are posted on an online web map.

The results of the tests can most easily be viewed on the web map above. For users who intend to perform additional analysis the data is posted at the links below. These links allow users to access the data directly using ESRI software.

These results can be downloaded in ESRI file Geodatabase format at this site.

The Department of Public Service is partnering with Ookla to get an objective, third-party view of mobile wireless network coverage and performance throughout the state. This project will employ Ookla Wind®, a handset-based testing and monitoring solution, and Speedtest® by Ookla, the definitive way to test the speed and performance of your internet connection. Personnel from the Vermont Agency of Transportation (VTrans) will drive all state-maintained highways in the state. The VTrans drivers will have a kit of handsets supplied by the six facilities-based providers operating in Vermont: AT&T, FirstNet, T-Mobile, US cellular, Verizon, and VTel Wireless. These devices will be configured to continuously conduct internet tests and voice calls using Ookla’s app as the driver navigates the road.

While the state has committed to testing as many roads as possible it is not practical to test every road, so we are also asking Vermont’s residents to contribute to this state-wide testing effort by conducting tests in their neighborhoods using their own devices. Residents can contribute tests in areas that the state will test, as additional tests will make the results more robust.  Where residents can help the most is by testing in areas that are not slated to be tested by the state. The routes for the 2022 drive test are depicted on this PDF map and this web map.

Ookla will provide all results from mobile wireless tests taken with Speedtest that are conducted by the public from July 1, 2022 through September 30, 2022. These results will be combined with the results of the state-led drive test into the final package of results. Participating is simple:  download the Speedtest by Ookla app on your mobile phone and directly contribute to our ongoing mobile network testing project. Take a Speedtest today to get key network performance metrics like download and upload speed for the mobile network that you’re connected to, anywhere in the state of Vermont. With Speedtest you can access the results of previously run tests with details such as date, time, and location — allowing you to compare your results and understand how your wireless carrier’s network is performing over time. Download the free Speedtest by Ookla app at the app store or from Ookla.

PLEASE DO NOT USE THE OOKLA APP TO TAKE A SPEEDTEST WHILE DRIVING. We ask that participants not conduct speed tests while driving in a motor vehicle to ensure the best quality test and safety of participants. Unlike the standard Ookla app, the system employed by VTrans drivers has been configured to allow for autonomous operation in a moving vehicle without the driver's attention. If you choose to contribute a test taken with Speedtest, please conduct these while stationary. The best way to participate to conduct speed tests at locations where you live and work; at the homes of friends, neighbors, and family; and at shops, restaurants, and recreational areas you visit. If conducting a speed test in a vehicle, please be sure you are stationary and safely parked in a designated parking area.

Residents who participate using Ookla’s app are responsible for reading and understanding the terms of service, including understanding the data usage requirements and privacy statement. Data charges from your mobile provider may apply when using the application. Ookla will provide only the results of the tests – no personally identifiable information will be provided to the state. Ookla has privacy and terms of use policies. The state recommends that consumers review these terms prior to using the app.

We recognize that not all consumers have the ability to contribute their own tests.  If you are aware of a road with significant importance that is not depicted on the planned routes, please email us at psd.telecom@vermont.gov. We will attempt to accommodate requests to expand the scope of the drive test. We cannot guarantee a test on every route, but we will try our best to accommodate as many requests as possible.

These results will be used for many purposes. They will be posted on the state website for the public to use to determine the best available provider in their area.  They will also be submitted to providers who will use them to guide deployment of new sites.  The Department intends to submit all of the collected data to the FCC in the mobile wireless deployment challenge process.

The FCC publishes maps depicting coverage reported by the mobile wireless carriers.  Many consumers contend that these maps do not reflect the coverage they experience.  The FCC challenge rules lay out a process to challenge this asserted mobile wireless coverage. This involves two sizes of hexagons, referred to as the larger "resolution 8" and the smaller "resolution 9" hexagons; each resolution 8 hexagon contains seven component resolution 9 hexagons. To present a challenge for a given resolution 8 hexagon, tests must be submitted in at least four of the component resolution 9 hexagons. Moreover, at least two tests must be conducted within each resolution 9 hexagon, and these must be done at least 4 hours apart. If you live in an area with poor coverage, you can contribute to the process by conducting tests that conform to these requirements. The drivetest webmap depicts these hexagons in Vermont. This map can be used as a guide to ensure that tests are conducted in the appropriate areas.

The image below depicts the resolution 8 hexagons in the Plainfield area; the marked hexagon contains the Plainfield village.  The red colored lines depict the routes for the state drive test. 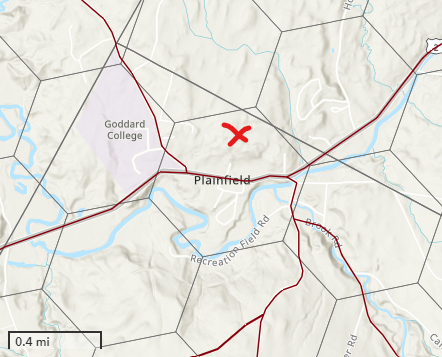 The image below depicts the seven component resolution 9 hexagons within this larger resolution 8 hexagon indicated in the image above.  To challenge coverage within this resolution 8 hexagons, speed test must be conducted within at least four of the component hexagons, for instance the four marked in this image.  This image demonstrates that meeting the demanding requirements in the FCC challenge process will be very difficult with data from a drive test alone. But if supplmented with data from consumers, meeting these requirements is more likely. 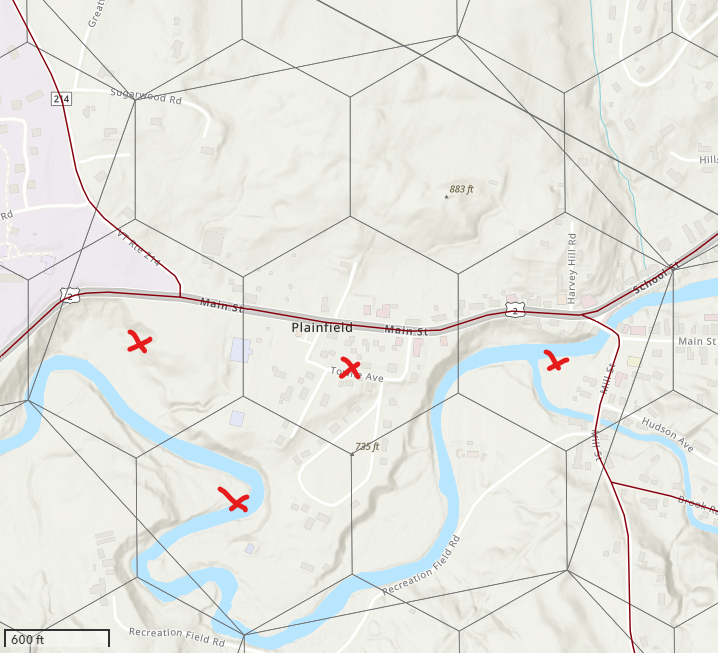 The Department of Public Service created an interactive map that shows the results of a drive test conducted in 2018 of mobile wireless coverage in the state. After reviewing providers’ maps that purport to show the extent of their coverage, the Department undertook a drive test of all major roads in the state to collect data and assess where mobile wireless service is actually available from a consumer perspective.   The initative and results are described in the report posted below. The Department prepared an interactive web-based map to allow users to view the drive test data for each of the six facilities based providers operating in Vermont: AT&T, Sprint, T-Mobile, US Cellular, Verizon Wireless, and VTel Wireless.  Static maps depicting a statewide generalization of the results for each carrier are also posted below.

Tutorial: a video tutorial explaining how to use the interactive map

Static Maps: Version 1, 2018, and Version 2, 2020.  PDF maps for each carrier, depicting coverage asserted by each provider along with the results of the drive tests.